April Fool’s Day sometimes also called All Fool’s Day is one of the lightest and soft days of the year when people play practical jokes, pranks and spread false news with each other as a kind of joke. The victims of such types of jokes are called the April Fools. 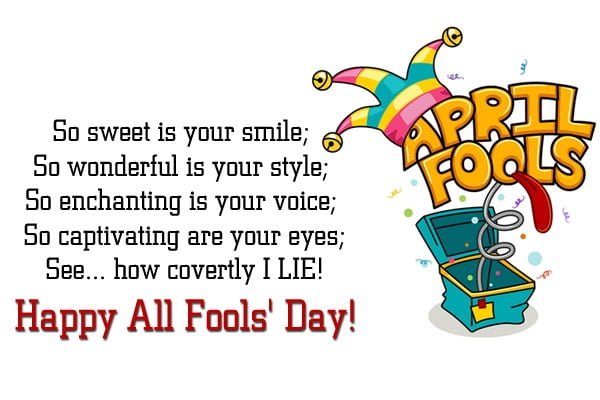 Many people are not aware of how this day came into being. It is believed that when the Christian calendar was being reformed, the New Year day was moved from 1 April to 1 January. Many people didn’t hear about the change, so they continued celebrating New Year’s on 1st April as usual.

This made people make jokes and pranks. The person with whom the April fool jokes are being played on is called an April fool.

There are different customs around the world on April fool’s day. In Scotland, the April fool’s day is celebrated for two days. The person on whom the joke is being played on is called ‘hunting the gowk’ where gowk is used to refer to as a cuckoo bird.

In France, a person on whom the prank has been played on is referred to as the ‘fish of April’.

In the United States, April fool jokes are played on almost everyone. One common prank played by Americans is that they point to strangers by saying that your shoelace is untied. When they look down and everyone laughs at them. Whatever the prank is played, if the person is caught, then everyone laughs at them and calls them “April fools.

April fools’ jokes can be very simple and at times can be very complicated and dangerous for others. Some people put salt in their friend’s coffee or tea and then make fun of them. While playing jokes and pranks, everyone should be careful not to play on strangers as they would mind and get angry.

Some people tease others by changing their alarm clock and then make fun of them. April fool’s day is celebrated all around the world with full happiness and joy. No holiday is observed in any country.

Nobody buys expensive gifts for their loved ones and don’t take them out for dinner.

Everybody have fun with their friends and family members and spread joy and happiness throughout the world.

I may forget to wish you on Holi, Diwali, or even New Year’s day.
But I am very thankful to God that I remember and wish you on a very special day meant for people like you.
Happy April Fool!

New financial year, new fools.
But how can we ignore the old fools like you.
It’s a crowning moment for you. Have a rocking special day!

Hey, I want to say something
And that is our BREAK UP
You really can’t imagine
How this happened in one day
One Handsome comes in my life
Hold my hands slowly and say
HAPPY APRIL FOOLS DAY

You’ll be able to pull the best pranks this year!

Here are a few of the ones you might consider trying:

1. First off, you might want to consider the wining lotto ticket prank. It is one of the easiest jokes that you can pull on about anyone. What you do is get a fake lotto ticket that when scratched off shows it’s a winning ticket of a certain amount. The lower the amount is, the more realistic it looks.

As soon as you give it to a person, they’ll think that they’ve won and as soon as they realize it’s a prank you’ll both have a nice laugh.

2. One of the most common April fool’s day practical jokes is pulling the stinky gas spray on someone. It’s all about the smell. If you manage to get your hands on the right gas spray, you’ll be able to clear out an entire room. And if you want to get your revenge on someone, you can do something like spray it on their clothes.

3. One more April fools day practical joke is to start giving away prank candy. There are plenty of candies out there that will make someone’s breath smell like a fart, garlic or even fish. It’s a great joke that you can use to trick lots of people, especially if you are in an area where there are lots of people.

These are a few of the harmless and practical April fools day jokes that you can try out and have some fun with. And if you want to do something different this year, you might want to give at least one of these suggestions a try.

The history of April Fools Day remains unclear until today. Some researchers believe that this day has its beginnings rooted in sixteenth-century France.

Before April 1st became known as April Fools Day or All Fools Day. Earlier precursors of the holiday existed such as the Festival of Hilaria held in ancient Roman times.  This festival occurred each year in March, not April.  In ancient Rome, on March 25, the Festival of Hilaria often involved honoring the resurrection of the god Attis. This day was identified as the Roman Laughing Day.  The holiday of April first might also be traced to a festival held on December 28th each year as well. The Medieval Festival of Fools; the latter holiday is still honored in Spanish-speaking nations around the globe as a day of pranks and jokes.

Some researchers believe that the holiday can be traced back to stories of Ceres and her daughter Proserpina.  According to the Roman myth, Pluto kidnapped Proserpina, so she could join him in the underworld.  Proserpina cried out to her beloved mother, Ceres. B.ut her voice only created an echo; following the echoing voice to find Proserpina is an act associated with the errand of the fool or the fool’s errand.

During the Middle Ages, March 25th marked the beginning of the New Year in many towns in Europe.  In France, the entrance of the New Year was a holiday that lasted a week and ended on the first of April.  Some schools of thought assert that this is the time when April Fools came into being. When some people continued to celebrate the New Year on different dates like the first of January, they were mocked and ridiculed for doing so.

When the calendar was introduced by Charles IX, the New Year’s was shifted to January 1st.  Some people refused to adhere to the change while many others were left unaware of the alteration to the calendar.  Since new information was slow in reaching people. The news was often communicated when people traveled by foot can carry the news to others. many individuals were not made aware of the new calendar and its dating.  People began identifying those that did not celebrate January 1st as the New Year as fools.  Some researchers believe this is where the notion of fools and April 1st came together and that it evolved into a day of pranks on the gullible.

The first known recorded mention of April 1st being associated with jokes is identified in 1392 in Geoffrey Chaucer’s Canterbury Tales. Some people argue that the alteration of the calendar during the sixteen century is the reason behind the holiday. But such arguments cannot explain the fourteenth-century references to the practices associated with April 1st. Chaucer makes mention of April First in the “Nun’s Priest’s Tale.”

In the year 1508, Eloy d’Amerval, a French poet, mentions “April Fish,” or “Poisson d’avril,” in his poetry. Some scholars believe that this is a direct reference to the April Fools holiday. Later, in the late 1530s, Eduard de Dene, a Flemish poet, wrote about a nobleman who sent some of his servants out to conduct foolish tasks on the first of April. In the late seventh century, John Aubrey, an English writer and antiquarian, makes mention of a “fooles holy day,”. Which is considered the first mention of the holiday in the British nation?

During the eighteenth century, April Fools spread to places like Scotland and England before making its way to the colonies when settlers arrived in America. Different cultures around the world have different types of celebrations for the day. In Scotland, the observance lasts a full two days, and the second day of the celebration involves pranks or jokes related to the posterior area of one’s body; thus, this day is identified as Taily Day. It is believed by some that the prankster’s “kick me” sign is rooted in this Scottish tradition.

On December 28th, in Mexico, there is a holiday much like April Fools Day too. A day when the innocent children killed by King Herod were remembered, this holiday evolved into one with a focus on jokes, pranks, and humor. Besides, in India today, on the 31st of March, the Huli Festival is held; this day is also a day of jokes and fun as participants celebrate spring’s arrival. Besides, April Fools Day occurs for two days in Portugal; the Sunday and Monday that occurs before Lent. Meanwhile, in the United Kingdom, in New Zealand, and South Africa, jokes and pranks are played until noon. If jokes are played afternoon than the prankster is called the “April Fool.” In Australia, Canada, Brazil, Germany, Russia, Japan, South Korea, and the Netherlands, joking and pranks are ongoing throughout the day.