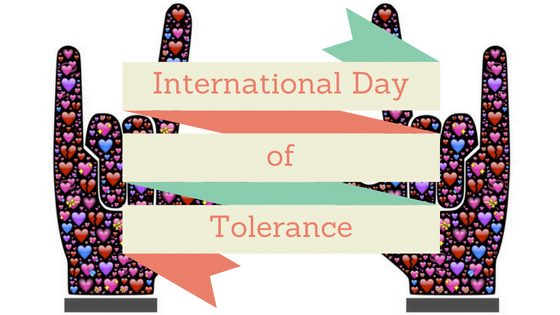 The United Nations Charter states “We, the peoples of the United Nations determined to save succeeding generations from the scourge of war … to reaffirm faith in fundamental human rights, in the dignity and worth of the human person… and for these ends to practice tolerance and live together in peace with one another as good neighbors.”

Universal Declaration of Human Rights also affirms that “Everyone has the right to freedom of thought, conscience and religion “of opinion and expression” and that education “should promote understanding, tolerance, and friendship among all nations, racial or religious groups”

International Tolerance Day urges us that people should accept and respect the existence of other people irrespective of race, gender, religion, border, and country.

Why is the International Day for Tolerance important?

Similarly, at the border level, the countries should accept and respect the existence of all other countries in the world so that this world can be saved with the utmost dangers of wars.

In today’s society and culture, unfortunately, overall the Tolerance level of people is been declined. We watch so frequent news of intolerance behavior of people, where sometimes murders/killing incidents take place on small disputes/fights.

I still remember incident news that I watched on media, In which there was in a small town an ice hawker was selling the ice in the hot summer season and a small kid of around 8-10 years passing by tried to collect some piece of ice from his shop without paying.

The shopkeeper was so intolerant, infect the cruel person that he beat the kid with the ice-cutter tool in his hand and he beat him so badly that even the kid died.

By this incident, you can imagine how much is the tolerance level of people living in our society. We all are human being and nature has created every single human with a unique personality, every one thinks and acts uniquely, and we should accept this uniqueness of humankind and accept and respect every human soul living in this world.

Tolerance cannot be taken for granted.  It has to be taught and communicated in society at each level.  Education, inside and outside the classroom, Is essential for strengthening tolerance culture and for opposing hatred and discrimination.

On this International Day of Tolerance, Let us recommit to dialogue and understanding among all peoples and communities, and let us focus our minds and hearts of those who face discrimination and demotion.  Single humanity means living together and working together based on mutual respect for the great wealth of human diversity and making this world a better place to live for everyone.

Tolerance is one such top quality that is thought about as the bedrock of culture. Due to globalization, individuals of various histories, cultures, as well as faith cohabit.

As a result, to establish resistance as well as consistency is a crucial variable. Resistance generates a culture in which people feel valued as well as valued. Everyone has their very own space with their suggestions, ideas, ideas, and also dreams.

No question, for a healthy and also live-able society, resistance is an essential aspect. One needs to value various other societies, caste, color or creed. On the other hand, we can’t disregard the truth that resistance does not mean that only one individual or event shows patience and also approval for others, whereas the others do not.

Consequently, tolerance ought to be revealed on both sides. Tolerance helps in individual growth by opening on your own to listen to others as well as their mindsets.

Today, produces awareness regarding the dangerous effects of intolerance and discrimination in society. To eliminate despises at a specific level can be dealt with by training sessions at numerous levels and also by the use of digital, print as well as social media.

We need to acknowledge that the varied opinions, as well as points of view upon beliefs, race, politics, as well as geography, are the shades of mixed neighborhoods. It is time to comprehend that the variety of human actions, the globe’s cultures, and basic flexibility make the globe extra stunning.

How do we celebrate International Day of Tolerance?

The best thing to do is go out and participate. Whether it’s a candlelight vigil for the victims of intolerance or a lecture from an esteemed activist or thought leader, getting out there and getting involved will only help you grow.

How do we celebrate International Day of Tolerance?

Why is the International Day for Tolerance important?

Why was Tolerance Day invented?

Why was International Day for Tolerance declared by the Unesco?

The International Day for Tolerance is an annual observance day declared by UNESCO in 1995 to generate public awareness of the dangers of intolerance.

What is an example of tolerance?

I hope you like my article about International Tolerance Day.