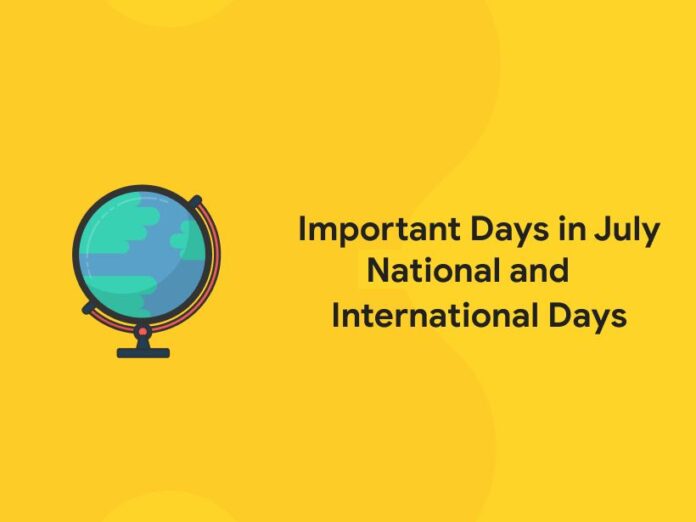 National and International Days in July 2021

Check Out here, List of National and International Important Days In July 2021.

Canada Day is a national holiday celebrated annually on July 1. It celebrates the anniversary of Canadian Confederation, which took place in 1867.

Canada Day is a federal statutory holiday, as well as a day off for the public. The date was chosen by Queen Victoria’s daughter, Princess Louise, and is observed only in Canada.

World Zoonoses Day is held every year on July 6. This is to commemorate the scientific progress of the first vaccination against zoonotic diseases. Zoonotic diseases are infectious diseases caused by bacteria, viruses and parasites that spread between animals and humans.

World Forgiveness Day is a day to forgive and be forgiven for the mistakes that were made in the past.

The 7th of July is the day of World Chocolate Day. This day celebrates the chocolate and its tradition, as well as the importance it has for many cultures.

Below are some ideas on how to celebrate this day:

World Population Day is celebrated on July 11 each year to raise awareness of the impact of growing populations and issues such as gender equality, the importance of family planning, poverty, maternal health, and human rights.

National Simplicity Day is celebrated on July 12 every year to commemorate the life, work and philosophy of poet, writer and leading transcendentalist Henry David Thoreau. Thoreau was born on July 12, 1817. He advocated a simple life and wrote many books on this subject.

Paper Bag Day is celebrated on July 12th every year around the world. The purpose is to let people know that the use of paper bags can help combat climate change and environmental pollution.

Every year on July 12th, the world celebrates Malala Yousafzai’s birthday. At the age of 17, Malala became the youngest ever recipient of the Nobel Peace Prize. This day also respects the rights of children and women.

July 13th is National French Fries Day, which aims to recognize the most popular fast food in the world and the opportunity to taste different varieties of French fries.

Bastille Day is a national holiday in France. It celebrates the actions of a group of French who are tired of the king’s rule. They rushed into prison to obtain weapons and release prisoners. It marked the beginning of the French Revolution.

The International Day of Justice commemorates the historic adoption of the Rome Statute on July 17, 1998, marking the importance of continuing to combat impunity and to provide justice for the victims of war crimes, crimes against humanity and genocide.

The International Chess Day is celebrated on July 20 every year as the founding day of the FIDE (World Chess Federation).

The United Nations General Assembly announced the International Day of Friendship in 2011, with the idea that friendship among people, nations, cultures and individuals can inspire peace efforts and build bridges between communities.

Canada Day: What It Means to Canadians