World Ozone Day is celebrated on 16 September every year. The purpose of celebrating the event is to spread awareness among people about the depletion of the ozone layer and seek possible solutions to protect it.

On this day, people from all over the world are expected to join the Montreal Protocol and attend lectures and seminars. Many commonly used chemicals have been found to have a great destructive effect on the ozone layer.

How to celebrate World Ozone Day 2021

It is expected that people from all over the world will gather in Montreal on September 16th to participate in discussions and seminars.

What is the Ozone layer?

The ozone layer (also known as the ozone shielding layer) in the Earth’s stratosphere is a delicate layer of gas that absorbs most of the sun’s ultraviolet rays. These rays can cause many skin diseases.

The ozone layer has high concentrations of ozone, and it is a part of the atmosphere. Ozone is a gas composed of three oxygen atoms, O3. Depending on where the ozone layer is, it can harm life or protect life on Earth.

Most of the ozone remains within the stratosphere, so it acts as a shield, protecting the Earth’s surface from the sun’s harmful ultraviolet radiation.

If this shield were to weaken, we would all be more susceptible to impaired immune systems, cataracts, and skin cancer.

Why Protect the Ozone Layer?

‘Montreal Protocol – Keeping us, our food, and vaccines cool.’. This year, we celebrate the 36th anniversary of global ozone layer protection.

The History Of World Ozone Day

The United Nations General Assembly has designated September 16 as the International Day for the Protection of the Ozone Layer.

To protect life on earth, protect the ozone layer, and prevent climate change. 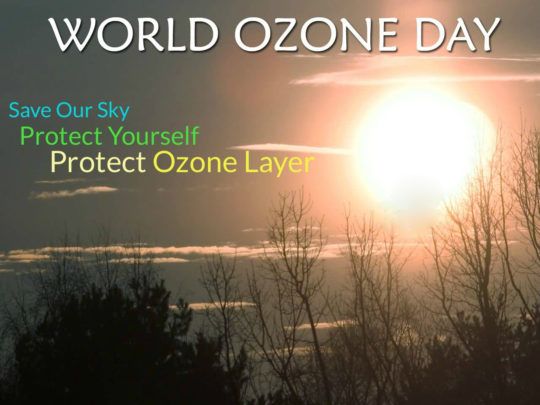 Ozone is like the “mother” of the earth…protects children from harmful radiation. Our mother. World Ozone Day

The only factor preventing the earth from being bombed is the ozone layer. Protect it and protect yourself. Happy World Ozone Day.